One of a Kind Offers

This set includes a WWII dated German Ammo can, WWII German Ammo and WWII dated German MG 34/42 Belts & Starter tabs. The LIVE ammunition (103 rounds) is all marked "P.25" (Metallwarenfabrik Treuenbritzen GmbH, Werk Sebaldushof (hla), with various other markings, steel case with FMJ projectiles. They are in good shape however after 77 years some do exhibit light surface rust and for the majority the lacquer is mostly or all gone.

The WWII dated German ammo can is a Model 41, maker's marked with "brh/4" (Schaltbau, Munich). It definitely looks like a veteran but is in very solid shape, no big dents or rusted out spots, and hinges both work. 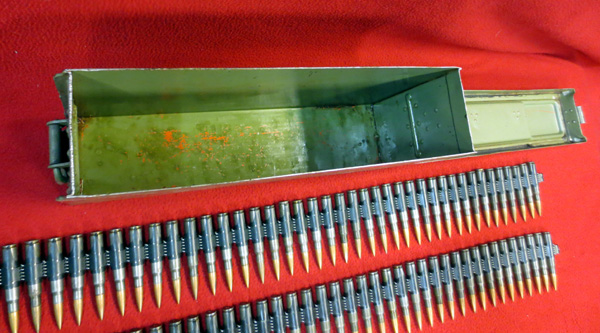